Far from the scripted reality people consume from television, she is a transgender woman moving through an intensely personal, confusing struggle. No one understands this better than we.

Bruce Jenner is one of us. Most specifically, I speak of her as a transgender woman whom I now call my sister. She needs us as much as we need her; and her story, while told in a very different setting than reflects most people’s reality, is the story of all transgender women.

To be sure, there are many aspects of Her life that are completely foreign to anyone except, well, Her. (“Her” is how she referred to the female identity that’s always been present. I use this instead of “Bruce” because I am constitutionally unable to call a transgender woman by her birth-assigned male name).

Yet, as I listened to her interview with Diane Sawyer, which I found to be respectful and appropriately educating (you could have dropped the male pronouns once she came out though, Diane), I heard a story I’ve heard many, many times. I’ve even told it of myself. As children living in an experience as the Gender Other, we have clear definition or understanding to describe what is in our hearts and minds. We know that we feel somehow wrong in our gender role. Some of us are smart enough to figure out that we’re more identified as girls than boys, or boys than girls, as the case may be. Yet, there is a sense of being so distant from others of our sex that we are often going through motions that are based on what someone else expects us to do without any understanding of why. Many of us become young actors before we can even complete elementary school.

As time goes on, our development continues along its own path. Many of us are unable to mask our gender expression, and our behaviors fall outside of what people consider gender appropriate. For feminine boys, this, in a word, is hell. Often ridiculed, humiliated, and physically abused; we run, duck, and stumble our way through school until we can reach the relative safety of adult lives and the ability to choose freely for ourselves. Many of us never make it this far, as the high incidence of transgender teen suicide attests. Many who do live on to experience the struggle of existence in a world that offers few safe harbors for transgender women. We do what we must, and it’s not always pretty.

She was not bullied in school. She didn’t need to engage in sex work or deal drugs to survive in a world that would otherwise give her nothing. She was never fired from a job or even passed over for a promotion. Instead, she was an elite athlete in school, and later, an Olympic decathlon winner. She married beautiful women, raised beautiful children, and presented to the world our culture’s ideal of manhood.

Her torment, though, was always there.

This is why she needs us most. Whereas we who have lived through transphobia quickly learn the value of community and resiliency that comes with it, she will be impeded to reach us. Whereas other Los Angeles area transwomen can anonymously slip into an area support group or have a girls night out in West Hollywood, ease of community access will not be Her own. She will be relentlessly followed by paparazzi wherever she goes for the foreseeable future. Her every move in her transition will be documented for the world.

Far from the scripted reality people consume from television, she is a transgender woman moving through an intensely personal, confusing struggle. No one understands this better than we. And no one can tell her that it really is going to be okay as we can, because we know that at the end of the day, the courage it takes to be transgender is itself a guiding purpose. We can tell her that being transgender is in fact a blessing, an opportunity, a source of joy in that we have a life that we created without any blueprint. Many of us suffer from depression; and yet, the bigger story is in our triumph, in our ability to rise each day and make a decision to live in our truth.

What’s more, the transgender community needs Her. Until the Diane Sawyer interview, there was no major television broadcast that educated so many millions of viewers on transgender identity. We transgender folks knew the story well, but very few people outside the community did. Now they do. Now, when they see us, they see her. They know something of our struggle. And that opens them to more questions. People who ask questions instead of foreclosing with an answer they’ve already made based on prejudice are those who can serve as our allies in the struggle for justice. And that is a very good thing.

Sister did her part. Are we who watched her story, admiring her courage, ready to ours?

From that first time each of us learned what it means to be Other, something transformed in us. 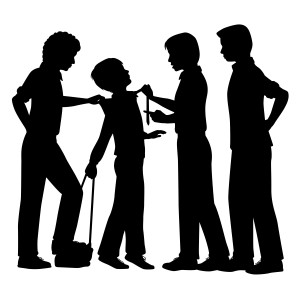 Childhood bullying takes many forms. We tend to think and talk of it as a phenomenon that happens in schools; which is of course often true, but not always. Bullying frequently occurs in families, and is enacted by older, stronger, or more able-bodied siblings, cousins, and even older adult family members that include aunts and uncles, parents and grandparents. Growing older, we often tell ourselves that it was “kid stuff,” that we outgrew. Forgive and forget, right? Except when we do neither, but tell ourselves we’ve done both.

Peering back down the long road we’ve travelled since that season of our life, we tend to shudder and attempt to slam the door shut on those memories. Yet, the door doesn’t close all the way, flying open at inopportune moments.  In those instances, we vividly recall not only the incident(s), but the awful sensations that accompanied it and how helpless we felt in that moment. We never like to revisit the things from our past that make us shudder. So why go there?

It’s a legitimate question. After all, nobody wants to revisit a painful past. Why would a distant memory of being bullied matter to us today?

Well, what happened in the past doesn’t really stay in the past. From that first time each of us learned what it means to be Other, something transformed in us.  In our remarkable knack for human survival, we began to learn a set of characteristics to keep us safe from future hurt. We learned to confront or avoid as a way to keep moving through life.

As we grew older, our strategies for continuing to act these basic fight or flight instincts grew more elaborate, our awareness of how to avoid rejection and humiliation more keen. In doing so, we may have well learned a method for keeping people who would harm us at bay. An unfortunate by product of operating from these same strategies, though, is that we often push away the people we care most about at bay, and we restrict new opportunities for growth. We fear new ventures because the doubt from our childhood remains instilled. Our fear of failure is so prevalent that we keep ourselves from soaring; often sabotaging ourselves before we even take flight.